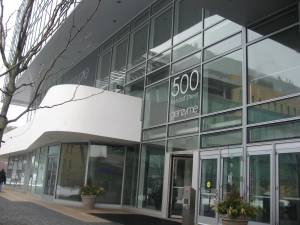 Last Thursday my alarm went off at 3am – yes 3am. I got myself up and drove to the airport because I had an early morning flight to Boston. I was invited to be a guest patient speaker at Genzyme’s Annual Marketing Meeting. So even though it required a 3am alarm, I was thrilled. I was so excited to be heading to the home of where my life saving enzyme replacement therapy was developed and to meet even more of the wonderful people at Genzyme.

It was a quick two day adventure. They packed a lot of activities in those two days and even managed to get me in and out of Boston between serious snowfalls. 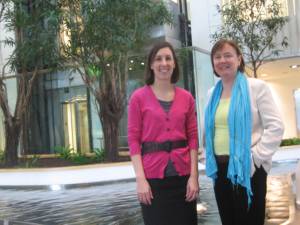 After being picked up at the airport I was whisked away to Genzyme Headquarters for a tour. I was met by Kathleen Coolidge from Patient Advocacy who spent the entire day with me. An employee volunteer gave me the grand tour of the building – which is beautiful and amazing in addition to being green. Lots of natural light, water features, live plants – after working in a windowless basement under florescent lights for years, I’m not ashamed to say I would love to work in that building.

It was then off to the Allston plant where they manufacture two enzyme therapies and where Myozyme was created. I had lunch with several Genzyme employees who are currently training for the Boston Marathon. Each of the runners is paired with a patient who they will “run” for to help raise awareness for rare diseases. Angela DeLucco from Employment is running for me. I think is so amazing that these employees are out there on their own time, pushing their bodies to limit, running for those of us who can’t. If you’re in Boston on April 11, 2011 be sure to cheer them on!

After lunch I was treated to a tour of the facility, where they actually make the drugs. It really is a complex and fascinating system and it takes a long time from start to finish. It is pretty unbelievable to stand next the huge containers used to make the drugs and imagine when all is said and done, I’m hooked up to a little IV bag at the end. It really makes you appreciate the long journey the meds make before reaching the patient.

After my tour it was time to give a speech to the Allston workers. I was scheduled to speak and share my story during a town hall event. There was an incredible turn out, I must say, I was a little worried I would be addressing an empty room – but it ended up being standing room only! I took them through, what my local rep Steve has deemed, my diagnostic odyssey. From my medical history, to my first symptoms, to my misdiagnosis, to how bad things got for me physically, to starting Lumizyme and how it has saved and improved my life. Everyone was so engaged and asked such great questions. I am very grateful to everyone for the opportunity to meet with these folks, but the most touching moment was when a man from the audience took the mic to make a comment, something to the effect of, “I just work in research, I’m not out there saving lives, but I’m just so grateful that you would come and speak to us, that I had the opportunity to hear how well you’re doing.” I made sure to not only thank him for his kind words, but to remind him that he is part of a team and people depend on him to do his job, therefore it is important. 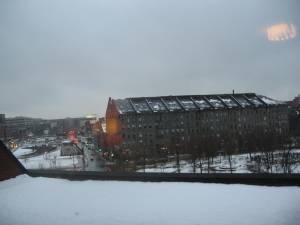 View from my hotel room. Yes, it was cold outside but not as bad as I thought it would be.

After the Q&A session was complete it was time to go check in at the hotel. I unpacked and took a quick power nap because it was then time to meet some more Genzyme folks in the lobby before heading to dinner. I had a nice quiet dinner with Kathleen, Angela, and Maureen Stellwag from US Marketing. Maureen had reached out to me last month and invited me to 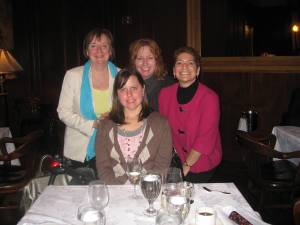 Dinner with the girls! Kathleen, Maureen, and Angela - and that’s me in front.

the meeting, so it was nice to have some time to get to know her. She is a Disney fan on top of working for Genzyme, so clearly she is an awesome person! After dinner, it started lightly snowing, not enough to be a problem or even make it really cold, it was just pretty. It had been a long day so I pretty much collapsed when we got back to the hotel, luckily I didn’t have to be downstairs to give my presentation at the meeting until 10am – thank you Maureen, I needed the sleep. 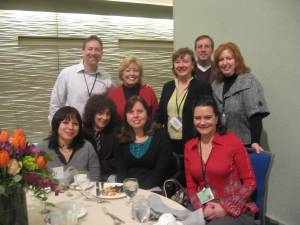 Lunch with my Genzyme peeps before heading to the airport and ditching the snow.

Maureen introduced me and played the video clip from Ivanhoe broadcasting and then I shared my story with another roomful of Genzyme employees. Again, I was greeted with earnest attention and genuine interest followed by a Q&A session. Everyone was so kind and complimentary, but honestly – it was my pleasure. After all, without them I wouldn’t have been able to literally stand there and speak for that long. My legs and respiratory system would have been too weak to complete that task without my Lumizyme treatments.

One of the questions I was asked I could use some input on answering. I was asked what could Genzyme do better for their patients? The only thing I could come up with is having them develop a better way for the whole patient community to interact and support one another as there are a bunch of fragmented groups out there. But if Genzyme created a place, because let’s face it, no matter where you are in the world, if your life has been touched by Pompe, you’re hopefully in contact with Genzyme.

I had a difficult time coming up with anything else because my immediate team, as well as anyone I’ve ever been in contact with has been beyond amazing. However, I have heard that not everyone is as lucky as I am, so I’d like to know what you think.

What can Genzyme do to improve patient relations? You can leave me a comment and I will email you back privately, and if you’d like me to keep your suggestions confidential I will. Any organization really does want feedback, especially about areas where they can improve. So if something has been on your mind, please let me know and I’ll deliver this information to Genzyme.